Today was an AMAZING day! We got to the jobsite at 6:30 am for the kick-off ceremony. When we walked by our lot, someone asked us if that was going to be our house and as we turned to see, there was a huge poster with our picture on it! 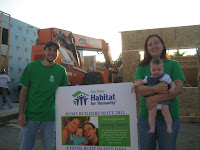 Oh my goodness, we were overwhelmed and so excited. There were hundreds of people there ready to work and build. Several Habitat for Humanity employees came up and introduced themselves, saying they were so excited to meet us. We also met the Mayor of Oceanside to welcomed us to the city as new residents and told us how much he was excited for us. There were also several news stations there and when the ceremony began, one of the Habitat guys prayed first to ask the Lord's blessing and protection on the day. Then the mayor of Oceanside came up and thanked the builders and all of the volunteers. He talked about how glad he was for all that Habitat was doing for the city and said that he couldn't wait for Friday's dedication ceremony. He said its one of his favorite things to do, come and hand the new homeowners (that's us!) the keys to their new home.
After the kick-off ceremony was done, all the workers got right to work. Within an hour, half of our outside walls were up. 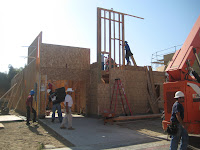 Another hour after that, this is what it looked like. When I walked by, I saw they had nailed that poster to the outside, proclaiming to everyone who they were building for! We feel very humbled and overwhelmed. We can't believe the blessings the Lord is showering on us.

A little while later we were talking to the supervisor from Swinterton Homes in charge of our house this week and he told us they were donating an air conditioning unit to us and they would be installing that for us this week. We were also told that we were getting solar panels donated to us and those would be installed as well. So basically, we get all of our electricity for free! I almost lost it when I learned that! God is so good!

Channel 10 interviewed us asking what it meant for us to being building and getting a new home. We talked about what a blessing it was and how excited we were. My sister saw the news story on their midday edition and told us the story was actually about how Habitat had misused some money donated to them and it was kind of a negative story. My sister told me that they did show our interview and that part of it was positive and good that they were showing a family getting a home, but we were disappointed to hear that with all of our excitement, the news story was a little slanted. Oh well, we moved on from that and got to work on our duties for the day. 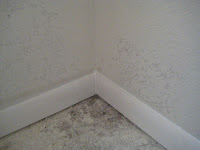 Today, I worked on the house next to us (the same one we've been working on the last two weeks) putting caulking on the baseboards and moulding inside the bedrooms. Andrew stayed busy all day installing cabinets in the kitchen.  We had 4 people working for us today, including my dad and Andrew's brother Jon. By the end of the day, we had racked up 42.5 hours, which get doubled because of the Blitz week, which makes the grand total, just for today, 85 hours.....added to the 63 we already have makes 148!! We are making so much progress towards our 500 hours goal! Move in day is looking closer and closer!!!
Posted by housebuildingmomma at 9:20 PM

housebuildingmomma
Oceanside, California, United States
I'm a wife and a mommy to the three most important people in my life. I love staying home with my daughter and son and so thankful that my wonderful husband wants to work hard so I can do so. I love to play piano, read, cook and blog.

1. a house
2. 3 bedrooms
3. a yard (for the dog and for us!)
4. an affordable mortgage payment (it will probably be less than what we pay in rent now)
5. a 2 car garage, with a driveway for parking, and extra parking only steps from our door (I don't have to carry the groceries all the way upstairs from the parking lot anymore!)
6. a place for a washing machine and a dryer in my own house
7. money to pay our down payment and enough extra to buy a brand new washer and dryer and even new couches (hopefully there will still be enough. With the stock market right now, we hope there is enough)
8. in the kitchen is a pantry! Probably more than twice the storage we have now, with a pantry for food!
9. our house is in Oceanside with a perfect breeze. Our apartment is not very well insulated, and it doesn't have air conditioning. Right now, during this little heat wave, our apartment gets to about 85-90 degrees inside in the afternoon and doesn't cool off. We sleep on top of our blankets with the fans on high, sweating in our bed
10. Our house is in a neighborhood that Habitat built. The whole street is all families like us, who worked their sweat equity hours to get out of a less than ideal living situation. Many of the families have children and our kids will grow up with them.
11. Our street is a very private cul-de-sac. Very safe for our kids to play outside, ride their bikes, hang out at the end of the street...
12. our house was built in a blitz, which means we are able to move in sooner! The average Habitat house is built in 9 months....ours was built in 5 days.
13. Our house was the house in the blitz built by the professional builder.....not much more is needed to be said.
14. The builder added finish details to our house that make it slightly nicer than the other Habitat homes. Those details are numbers 15-21.
15. wood detailed banister
16. chrome door knobs
17. recessed fire sprinklers with caps
18. white tile counter tops
19. upgraded moulding
20. upgraded carpet
21. a $4000 air conditioner (not that we even thought we would want central air conditioning because of our built-in breeze)
22. At the end of the Blitz week, we received a few gifts. Numbers 23-25
23. A bible from Habitat for Humanity
24. A beautiful framed canvas print of our family with the signatures of many of the volunteers and workers who worked during the Blitz week
25. a "Welcome Home" laundry basket full of home goods from Swinterton Builders, the professional builder that built our house.
26. Solar Panels on our roof to pay for our electricity
27. The neighbor behind us has an avocado tree that hangs over our fence. Free avocados!!
28. At least two christian families on our street. Probably more.
29. At the end of the Blitz Build, when our house was being cleaned, one of the workers was wheeling out a brand new mop and bucket that they had used to clean with and asked if I wanted it! Yeah!! Its the industrial size yellow bucket on wheels that has the squeeze thingy!! Whoo!!