We've been working every day that we possibly can for the last couple of weeks. Last week I put in about 35 hours just myself. This week should be the same. We hope to finish by next week and then begin escrow. I found out today that our house still needs to pass a few final inspections....landscape, plans, and even roads....I guess someone has to come out and make sure the road to our house is fine. I was hoping we'd be able to move in around Labor Day weekend....but I doubt everything can move that quickly. We can pray though! There is a process and a sequence to things so I just need to have patience :)

Yesterday, Andrew and I put in 10 hours together. When we got there in the morning, we started to build a lattice privacy panel over the back ledge of our large, upstairs balcony. Its very easy to see right into our next door neighbor's windows from our balcony, so we built these beautiful panels that I plan on growing some viney flowery plant. It took 2 or 3 hours to build them and we didn't have time to install them before Andrew had to leave for work.


After Andrew left, I did a couple of different jobs. I had to change the gas pipe from behind the range from a long, straight piece to an elbow shaped piece so that the range would fit better in its little space. I learned about sealing the pipes with yellow tape and also with a special jelly substance. I probably didn't have to use both, but its good measure so there won't be a gas leak. Once I got the pipe done, we (the superintendent and I) slid the range back into place and there was still a 2 or more inch gap from the wall. We figured out that the anti-tip bracket that Andrew had spent so much time installing was too far away from the wall. It wasn't Andrew's fault. He followed the directions correctly, they were just written so the range is that far from the wall, which I didn't like.
I felt so badly, though, that Andrew would have to move that thing again....it took him a few hours to put it in because he already had to move it once.....
So I decided to move it myself. I started by unscrewing it and then the superintendent brought me the hammer drill. Its a drill that hammers while its drilling....its used for drilling into concrete or cement. He got me all set up with the right sized drill bit and everything and I tried my hand at using the hammer drill. Well, its basically like a jack hammer. Totally shook my whole body while I was trying to aim and drill the hole in the right spot. After using all my body weight on the drill and seeing that the drill bit wasn't even penetrating the tile, I went back to the super to see what I was doing wrong. It turns out the drill bit was cheap and had dulled. That explains why, when Andrew installed it in the first place, it took him so long. Sometimes it pays to spend more money on quality equipment.....
Anyway, once the better quality drill bit was on the drill, the super asked me if I wanted to try again. I told him, I actually would rather if he just did it for me.....it was so hard to do myself.....anyway, he started drilling and it was as if the tile and concrete foundation were butter! It was so easy for him! It was probably because of the new drill bit though :)
Once the holes were drilled, it was easy to install the bracket and once it was in place, we slid the range back into place and it fit so much better! I love it!!
But, we had to pull the range out one more time, because I decided I wanted to grout the seams around the cabinets behind the range. I know it will never show, but its just one more little crack that critters can get it.

Wednesday
Today, we started the day by installing the lattice panels. It took awhile, but we got them in and they are beautiful!!! 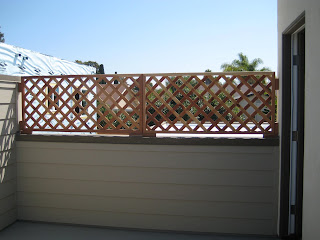 You can still kind of see into the neighboring house, but I plan of planting some kind of climbing flowery plant. It should end up being beautiful.
After that was done, we started hanging our vertical blinds. We started with the blinds for the downstairs slider. Andrew got the brackets in place before he had to leave for work. After he left, I clipped the railing into place and hung the slats. I also had to trim them all so they wouldn't drag on the ground.
After those were in place, I finished the grout behind the range area and in another little place near the pantry. Both of those places were very hard to get to and to push grout into the space. I got it all grouted, but it isn't very pretty. Thankfully, neither one of those places will show :) its just meant to keep critters out. 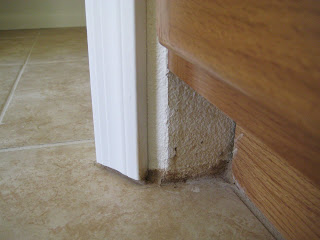 Once the grout was done, I finished one more job and that was clamping the plumbing lines (water and drain) from the dishwasher. The hoses run through one of the cabinets to get to the other wall where the water and drain is, and I wanted to screw them into the side of the inside cabinet wall so they would be more out of the way. It was kind of hard, just because of the awkwardness of being inside the cabinet on my side, reaching at an odd angle. It was also super hot in there. I was sweating on my face....but the hoses are clamped in place now. 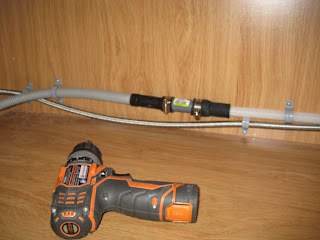 At the end of today, we had worked another 10.5 hours bringing our total to 426.75. We are very close!!
Tomorrow is a day off which I'm glad of because I need to get caught up on my chores at home and pack some more boxes!

Posted by housebuildingmomma at 8:34 PM

housebuildingmomma
Oceanside, California, United States
I'm a wife and a mommy to the three most important people in my life. I love staying home with my daughter and son and so thankful that my wonderful husband wants to work hard so I can do so. I love to play piano, read, cook and blog.

1. a house
2. 3 bedrooms
3. a yard (for the dog and for us!)
4. an affordable mortgage payment (it will probably be less than what we pay in rent now)
5. a 2 car garage, with a driveway for parking, and extra parking only steps from our door (I don't have to carry the groceries all the way upstairs from the parking lot anymore!)
6. a place for a washing machine and a dryer in my own house
7. money to pay our down payment and enough extra to buy a brand new washer and dryer and even new couches (hopefully there will still be enough. With the stock market right now, we hope there is enough)
8. in the kitchen is a pantry! Probably more than twice the storage we have now, with a pantry for food!
9. our house is in Oceanside with a perfect breeze. Our apartment is not very well insulated, and it doesn't have air conditioning. Right now, during this little heat wave, our apartment gets to about 85-90 degrees inside in the afternoon and doesn't cool off. We sleep on top of our blankets with the fans on high, sweating in our bed
10. Our house is in a neighborhood that Habitat built. The whole street is all families like us, who worked their sweat equity hours to get out of a less than ideal living situation. Many of the families have children and our kids will grow up with them.
11. Our street is a very private cul-de-sac. Very safe for our kids to play outside, ride their bikes, hang out at the end of the street...
12. our house was built in a blitz, which means we are able to move in sooner! The average Habitat house is built in 9 months....ours was built in 5 days.
13. Our house was the house in the blitz built by the professional builder.....not much more is needed to be said.
14. The builder added finish details to our house that make it slightly nicer than the other Habitat homes. Those details are numbers 15-21.
15. wood detailed banister
16. chrome door knobs
17. recessed fire sprinklers with caps
18. white tile counter tops
19. upgraded moulding
20. upgraded carpet
21. a $4000 air conditioner (not that we even thought we would want central air conditioning because of our built-in breeze)
22. At the end of the Blitz week, we received a few gifts. Numbers 23-25
23. A bible from Habitat for Humanity
24. A beautiful framed canvas print of our family with the signatures of many of the volunteers and workers who worked during the Blitz week
25. a "Welcome Home" laundry basket full of home goods from Swinterton Builders, the professional builder that built our house.
26. Solar Panels on our roof to pay for our electricity
27. The neighbor behind us has an avocado tree that hangs over our fence. Free avocados!!
28. At least two christian families on our street. Probably more.
29. At the end of the Blitz Build, when our house was being cleaned, one of the workers was wheeling out a brand new mop and bucket that they had used to clean with and asked if I wanted it! Yeah!! Its the industrial size yellow bucket on wheels that has the squeeze thingy!! Whoo!!